In recent decades, the air shipping has become the most effective way in shipping cargoes safely and timely. In the meantime, China’s aviation industry has been gaining its momentum. It will be helpful to take a look at the main airports in China, if you intend to conduct business in China.

In recent decades, the air shipping has become the most effective way in shipping cargoes safely and timely. In the meantime, China’s aviation industry has been gaining its momentum. It will be helpful to take a look at the main airports in China, if you intend to conduct business in China.

Located in Shunyi District , Beijing, China, Beijing Capital International Airport is the busiest international airport in China. The airport is China's air gateway and an important window for foreign exchanges.

Beijing Capital International Airport has three terminals covering 1.41 million square meters.  There are two 4F class runway and one 4E class runway, which are 3800×60 meters, 3800×60 meters and 3200×50 meters respectively. A total of 252 domestic and foreign routes have been opened.

Located in Pudong New Area of Shanghai, China, about 30 kilometers away from the center of Shanghai, Shanghai Pudong International Airport, is a 4F class civil airport. The airport is one of the three gateway complex hubs in China, a member of the International air cargo hub group in the Yangtze River Delta region, a member of the East China Airport Group, and the first hub airport and gateway airport in east China.

The airport is one of the three gateway composite hub airports in China and one of the top 100 major airports in the world.  The airport has 3 runways and 2 terminals. The future plan is to have 5 runways and 3 terminals. There are 202 passenger plane slots and 43 cargo slots (excluding FBO).  Terminal T1 covers 523,000 square meters and Terminal T2 887,700 square meters, with a total area of 1,403,700 square meters.  Covering more than 210 routes around the world, including more than 90 international and regional routes, reaching more than 40 countries and regions.

Chengdu Shuangliu International Airport is located in the southwest of the central city of Shuangliu District, Chengdu city, China, 16 kilometers away from the city of Chengdu.

It is operated and managed by Yunnan Airport Group Co., LTD. The airport is one of the top 100 airports in the world and the only large-scale gateway hub airport approved for construction during the 11th Five-Year Plan period.  It is China's eight regional hub airport, international aviation hub and the airport, along with Urumqi Diwopu International Airport, are listed as China's two major national gateway hub airport. On December 5, 2008, kunming Changshui International Airport officially started construction.  The east runway is 4500 meters long and the west runway is 4000 meters long; Number of slots (including combination slots) 161.  It can meet the operational requirements of 38 million passenger throughput, 950,000 tons cargo throughput and 303,000 aircraft takeoffs and landings.

In 2019, Kunming Changshui International Airport completed 357,080 flights and handled 4,807,978 passenger throughput, ranking sixth in China, with cargo throughput being 415776.3 tons, which ranked the ninth in China.

It is one of the world's top 100 airports, an international hub airport. The airport is one of the 12 major trunk airports in China, and one of the four major air cargo centers and express distribution centers in China. The number of take-off and landing sorties is 318,600, the number of slots is 199, and the passenger throughput is 41,971,400. There are two runways, among which the second runway is 3,800 meters long and 60 meters wide. There are 188 routes in total, including 154 domestic routes, 4 Hong Kong, Macao and Taiwan routes and 30 international routes.

In 2015, air passenger traffic ranked the top among domestic airports; In terms of the air cargo, it comfortably maintain the fourth position in China. 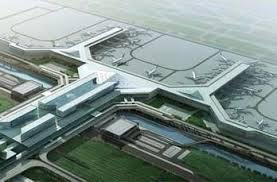 Shanghai Hongqiao International Airport, located in Changning District, Shanghai, China, is 13 kilometers away from the city center. It is a 4E class civil international airport, and one of the three major gateways in China, the airport with international scheduled flight , the class I airport and an alternate airport for international flights.

Before the expansion, Shanghai Hongqiao International Airport covers an area of 26.4 square kilometers and has a runway and a taxiway.  The runway is 3400 meters long and 57.6 meters wide (4E class), and the apron reaches 510,000 square meters.

Xi 'an Xianyang International Airport is located in Weicheng District, Xianyang City, northwest of Xi 'an city, Shaanxi Province, China, 25 kilometers away from the urban area of Xi 'an city.

As a 4F class civil international airport. The airport is one of the eight regional hub airports in China, an international scheduled service airport and one of the top 100 major airports in the world.  There are two runways, the length of the runway is 3000 meters, 3800 meters. It boasts 127 stops, 44 boarding Bridges and 25,000 square meters of cargo area.  It can guarantee the operation requirements of 10,000 passenger throughput in peak hours, 50 million passenger throughput in annual, 400,000 tons of cargo throughput, and 291,000 movements of take-off and landing.

It is a 4F civil international airport and one of the eight regional hub airports in China. As of August 2017, chongqing Jiangbei International Airport has three terminals, T1, T2 (domestic) and T3A (domestic and international), with a total of 730,000 square meters;  The airport owns three runways, 1.66 million square meters apron, 209 airport stands, 230,000 square meters cargo area;  It can ensure annual passenger throughput of 45 million, cargo throughput of 1.1 million tons, and aircraft takeoffs and landings of 373,000.