Container ships now piling up at anchorages off China’s ports

Container ships now piling up at anchorages off China’s ports

There are over 60 container ships full of import cargo stuck offshore of Los Angeles and Long Beach, but there are more than double that — 154 as of Friday — waiting to load export cargo off Shanghai and Ningbo in China.

There are over 60 container ships full of import cargo stuck offshore of Los Angeles and Long Beach, but there are more than double that — 154 as of Friday — waiting to load export cargo off Shanghai and Ningbo in China.

Whether it’s due to heavy export volumes, Typhoon Chanthu or COVID, rising congestion in China is yet another wild card for the trans-Pacific trade. 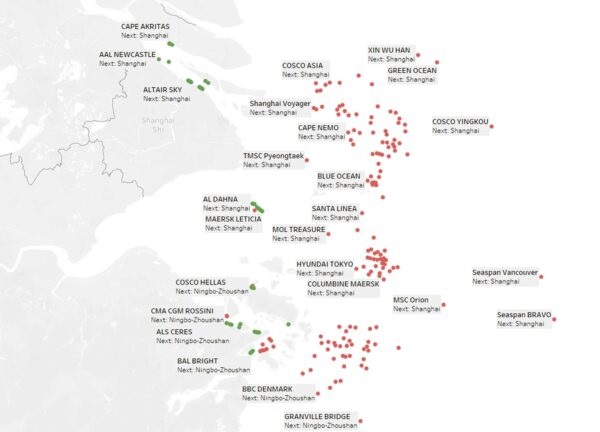 Congestion in Chinese ports that slows the flow of exports is bad news for U.S. importers but it could temporarily alleviate pressure on the ports of Los Angeles and Long Beach.

When operations at the Chinese port of Yantian were heavily curtailed by a COVID outbreak in June, ships at anchor in California’s San Pedro Bay declined. The problem for California ports was that the temporary reprieve was soon followed by a surge of delayed cargo.

“The devil in these things is the whiplash effects,” Simon Sundboell, founder of eeSea, told American Shipper. “What you’d rather have is more stability, not these swings, and I think what everybody fears is that the swings will become even more volatile. When the system is already this stretched, all of these unexpected events can be a causal factor in congestion.”

A major driver of congestion on both sides of the Pacific Ocean: Landside capacity (terminals, trucking, rail, warehousing) is limited, but the vessel capacity of a single ocean trade lane is highly flexible.

While the number of ships in the world is finite, operators can shift ships to wherever they make the most money. And the trans-Pacific is now a particularly lucrative trade: Spot rates including premiums can top $20,000 per forty-foot equivalent unit (FEU).

“These assets [ships] are super-mobile,” said Sundboell. “What’s happening now is the opposite of what dogged the industry for the past 20 years. Five years ago, people were asking: How can the trans-Pacific rate drop from $2,000 to $1,500 [per FEU] in the space of just six days? It was because you could take a vessel from one place and sail it someplace else, and suddenly there were more ships and a price war and rates dropped.

“Now we’re seeing the opposite,” he said. As ship operators pile more capacity into the trans-Pacific, congestion rises, delays mount, the incentive for shippers to pay premiums is supported, and all-in rates remain at record highs.